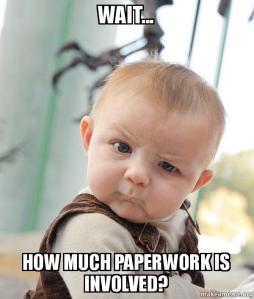 This week’s Wednesday’s Wild Chronicles Series will focus on the dreaded homestudy. Now that we had met with the expectant mother, it was time to get down to business and get our legal legwork done, killing a forest of trees completing all of the paperwork!

Well, get ready for a whole new level of privacy invasion! You can drop your legs out of the stirrups and put your clothes back on. And instead, open up every bit of information about your childhood, marriage, bank account, physical health, mental health, and spiritual beliefs. Get fingerprints, background checks, references from friends and clearance from your physician(s) and therapist, if applicable. Prepare to have someone inspect your home. And, after all of that, await the news that you have been deemed able to care for a child. Yeah, by the time we were done, I was ready to go put my legs back up in the stirrups because that seemed far less intrusive than what we had to share with a social worker! And, let’s just say I had a few (well, actually more than a few!!) not so pretty thoughts about the number of unfit mothers who are able to get pregnant time and time again without so much as a thought about whether they would make good parents.

Thankfully, our social worker was a very calming woman. I am sure she had seen a few overly anxiety-ridden prospective adoptive couples in her time! It had to be scheduled over the course of two days, which I have never understood why that is. And, it was several hours of questions with both hubby and I answering together and separately. She inspected our home, but was kind enough not to pull out her white gloves. A part of me wanted her to at least comment on how ridiculously clean our house was, but another part was thankful she didn’t mention my complete overkill in trying to prove we would be great parents.

I do get solace in reading other people’s accounts of their homestudy. I am not the only one to feel the need to scour the house! Nothing says I am ready to be a parent than a sterile tidy house said no actual parent ever! Two kids later, I might actually flunk prospective adoptive parents for an overly clean house. If you need your house looking that nice when someone comes over, you are NOT ready to be a parent. Nowadays, it’s pretty much a hit the highlights housecleaning for guests, hoping some grace is extended given we have a 3 year old, 17 month old, two dogs and a cat.

After a few months (Oh, yeah, I forgot to mention homestudies take forever to complete thanks to the wonderful government involvement! Note: sarcasm!), by some fluke in the system we passed! Homestudy complete – check! We were onto preparing to bring our son home!

(Next up: Making preparations)