The King of All Infertility Conversations

Many years into this infertility and adoption road, I have learned to have a pretty thick skin and extend people grace and mercy. Sometimes I have to do that out of sheer need to not let ignorance get to me. Other times it is warranted because infertility and adoption are one of those situations in life that can’t be understood unless they are experienced.

Thanks to the invention of Timehop, I was reminded of the most difficult conversation that I ever had to endure in the midst of everything we had been through. I had pretty much heard most of the standard remarks –“Just relax!” “Have you tried…” “You guys do know how babies are made, right?” etc… No remark could ever prepare me for the conversation I had five years ago today.

Give me a moment to set the stage for you. Prior to having children I worked as a nurse for about ten years. The last several were spent in a busy cardiology office with around 25 practitioners. One of my favorite assignments was to go out on the road and perform stress tests on patients in a family physician’s office. When we did them in the office there was always a cardiologist to call into the stress test lab if there was a major problem and a solid 10 other cardiology nurses to ask help to address less pressing situations. On the road, it was just me and a nuclear technologist. If things went wrong, there was no back-up. I liked the pressure and pace of those days.

Five years ago today, we had already been through the infertility treatments, the hysterectomy, and the failed adoption. We were again matched with another expectant mother, doing our best to just hold on and make it through to see if this time we would finally become parents. At that point, I pretty much felt like I had heard some variation of every comment related to our situation.

And, then this happened…

I was doing my usual meet and greet with one of the patients. I’d do the initial EKG, check their medications, etc. Often we got talking about other subjects just to break the ice and help the patients feel more comfortable. This particular day I had a middle aged man sitting on the exam table. In talking with him, he explained that he was under a lot of stress in his personal life. We talked a little further and he explained that he and his wife were divorcing.

I am not one to pry. It is not my business to know why they were divorcing. Honestly, I really do not want to know those details because my personal bias is going to come in and possibly make it more difficult for me to remain an impartial listener. I am sure I offered up an “I’m sorry to hear that.” He continued on and explained they were divorcing…

“BECAUSE SHE COULD NOT HAVE KIDS.”

To this day I am not sure how I did not punch this guy in the face. From my 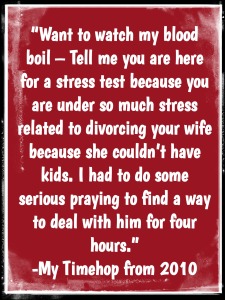 Facebook post on that day, I had to use a lot of self-restraint and prayer to effectively give this man as best of care as I would any other patient that I had under my care.

In the years that we had struggled, I had learned a lot about responding to comments regarding infertility and adoption. Many times I actually felt sorry for the person who made the remark because I knew that they would feel bad once they understood what was going on. I don’t know how many times I heard someone ask, “When are you guys going to have kids?” after I already had the hysterectomy. It was always so awkward. But, nothing, absolutely nothing, prepared me for that conversation.

That patient could have slapped me across the face and it would have caused less hurt and anger than the explanation for why he was leaving his wife. I could not help but to think of the wife and how this was impacting her. Not only was she struggling to become the mother she wanted to be, but she was also losing her marriage over it. It was a level of low blows that no human should have to endure.

In the comments from my post, my sister-in-law asked if we recommended he have exploratory surgery so we could check to see if he actually had a heart. There are many gaps in trying to explain infertility and adoption to those who have not experienced it. Sometimes it is educational, sometimes it is inexperience, sometimes it is a preconceived idea that I am working against. This however there were no words for, no explanation, no excuse.

I do not know the rest of the story. I pretty much shut down from that point forward. Maybe the divorce was her idea to free him to go on to have kids. I know in some of my darkest moments, I wished I could somehow free hubby from the barrenness my issues imposed upon us. But, in the end it always came back to the fact that he had married me, not my womb. I was more than just a means to grow a family, to him.

That day I realized that there is no level of “I’ve heard it all.” There is always some other remark to leave me stunned. I can honestly say, to date, nothing has been more difficult to deal with than this patient. He has topped it all and with ten years of this journey under our belt, that is saying a lot.

I also realized I had far more self-control than I had ever given myself credit for. Apparently, my skin had thickened to steel-like strength! I look back on that day and still want to punch the guy, if not physically, then at least make an impact with my words! But, somehow that day, I maintained the essence of professional composure.

Maybe it had to do with the fact that we were working with another expectant mom and it might have been difficult to explain to the social worker why I was in jail…! With less on the line today, it is probably good that I don’t work with the public anymore! That conversation might turn out a little differently!